Back To (Virtual) Reality: The Rise Of VR In Market Research 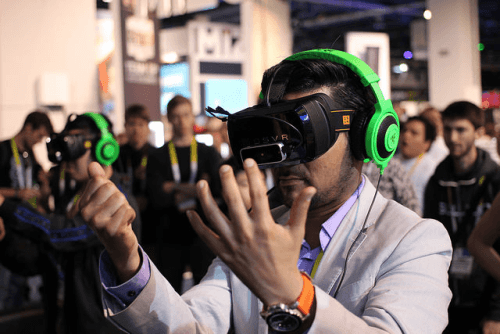 In the age of constant innovation, we as consumers and businesses have the opportunity to experience new technologies all the time. More recently, the vintage concept of Virtual Reality (VR) has undergone a renaissance, enabled by vast technological leaps forward. This concept, more often associated with its 1980s peak in video arcade games, actually had a much earlier beginning. The first form of VR was the WWII flight simulator, used to train pilots on the ground using computer-generated images surrounding a model cockpit before sending them into combat. As computer graphics and imaging technology advanced, so did VR. Head Mounted Displays (HMDs) were later introduced to the market for at-home video gaming and personal 3D or High Definition television viewing. Still, these headsets were simply screens for personal viewing, and made no efforts to manipulate the wearer’s environment: until recently…

In 2011, a video game enthusiast named Palmer Luckey developed the first proto¬type of the Oculus Rift in his parents’ garage in Long Beach, California. He wanted to combine the technology of personal viewing headsets and virtual reality, in order to achieve the ultimate gamer dream of video game immersion. The Oculus Rift is a set of virtual reality goggles that connects to your computer or mobile device and immerses the wearer in an environment of their choosing. Like Steve Jobs and the Apple I, Luckey’s invention enjoyed a meteoric rise from garage to corporate success: Facebook has since purchased the company and the rights to the headset for $2 billion.

Picture a set of large ski goggles, with a set of screens instead of glass. The screens display two images side by side: one for each eye. A set of lenses is placed on top of the screen, designed to focus and reshape the picture into a stereoscopic 3D image. The goggles have embedded sensors on all sides that monitor the wearer’s head motions and adjust the image accordingly, allowing the wearer to look up, down, and all around their simulated environment. As a result, the wearer is completely absorbed in the artificial environment, as opposed to having their existing environment augmented, such as in GoogleGlass or Microsoft’s HoloLens, in which holograms are added to the real world through use of glasses.

During a recent market research event in Brooklyn, my colleague and I had an opportunity to test drive the Oculus Rift. The simulated environment was a cartoonish representation of standing on scaffolding scaling the side of a high rise building. When told to jump off the building, a fear of heights that I never knew I had immediately kicked in, but I took the step and felt myself falling to the ground below. Then told to look up, I could see the scaffolding falling right above me, and I jumped out of the way. Even though I knew full well that I was inside a hotel conference room in Brooklyn, I was fully immersed in a world where a falling object meant imminent death.

So how does the recent boom in virtual reality affect market research? In a much less extreme way, virtual reality can help researchers understand and influence behavior through immersive experiences, rather than self-reported, recalled experiences. Respondents in a focus group are often asked to think back about their purchase decision or experience with a product or service. Psychological research has shown that these memories are often full of inaccuracies, dependent upon many factors such as emotional state at the time of the event and the time of recollection, the environment, and the amount of time that has passed since the experience in question. With immersion, reactions are more automatic and truthful, as seen by my flight or fight reaction, than simply self-reporting. By putting people into environments and situations about which we want to learn, we can get a compelling look at the less conscious drivers of brand choice, the customer journey, and so on. Using VR to collect data can reduce or eliminate such biases, particularly in the practice of:

One application recently utilized in consumer market research circles is the use of the Oculus Rift by the electric car brand, Tesla in conjunction with eye tracking software embedded in the software to test a new interior concept. Although virtual reality is not expected to completely replace today’s qualitative methods, it is definitely something to be aware of as the business and consumer worlds become more digital-focused, and our appetite for bigger, better and faster products and experiences, continues to influence innovation. A world where gamers and market researchers exist in technological harmony? We should be so Luckey…

To see how we can help your business