Gamification and its role in B2B market research

What is this word “gamification”? It wasn’t in dictionaries ten years ago, so is it just another marketing fad?

Gamification may be new but games are not. We have been programmed to play and enjoy games since we were children. A game is a form of competition, particularly one that engages and amuses us. If we can turn life into a game (or at least certain aspects of it) we can make boring chores more interesting. Gamification is the process of turning an activity into a game and in so doing encouraging our engagement, particularly with a product or service. Gamification promises to make tedious things more fun.

So powerful is the allure of games, it can be used to change behaviour. An experiment carried out in a subway station in Odenplan, Stockholm, showed how gamification encouraged people to take more exercise. Attempts to persuade people to walk upstairs rather than use the escalator fell upon deaf ears until the stairs were converted into piano keys. When people stepped on the piano keys they played notes. The fun and engagement this created encouraged two-thirds more people to choose the stairs in preference to the escalator.

Since everyone (or nearly everyone) is now familiar with digital game playing, it has been seized upon by marketers who realise that gamification can be used to engage with their target audiences.

Nike introduced a bracelet with a special technology that monitors the workout sessions of the wearer. The wearer must download a Nike App which tracks their exercise routines and provides statistics such as the number of calories burned. Users get daily feedback on how close they are to meeting their daily workout plan and, when they hit a goal, an animated cartoon character jumps up and down in celebration.

Some commentators believe that the market for gamification software in applications such as this is soon to top $2 billion per annum.

We market researchers face problems in surveys which could be helped by gamification. Getting people to take part in surveys, particularly online surveys, is increasingly difficult. The world is survey weary and response rates among some audiences are falling like a stone. If we can make a survey more fun, we will engage more with respondents, increase response rates and obtain better results.

Specialist software isn’t essential for turning market research questions into a game. It is often just a matter of finding the right words for the question. Consider the following traditional questions and what could be achieved by asking them in a different way.

Quite small changes to the nature of the question can improve the response rate significantly. It is not unusual for a gamified question to treble a response rate. 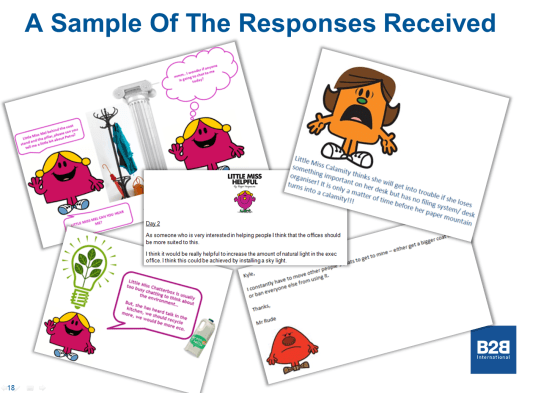 In our offices at B2B International we wanted to know how we could improve the working environment. Instead of asking people in the traditional manner what improvements we could make, we assigned everyone a Mr. Men character and asked them to provide daily tweets of their thoughts in no more than 140 characters. The responses were fed back over a week with prizes to ensure there was a daily flow of insights. The results proved far more inspiring than if we had simply asked straightforward questions. People immersed themselves in the characters they had been given and made comments that in a normal question may have been inhibited.

Gamification in market research is not just about the way questions are asked, it is also about the way they are presented on the page. In an online survey it is much more interesting to have sliding scales and drag-and-drop responses than repetitive radio buttons. Questions that are slightly different will keep respondents interested and stop flatlining (a condition in which respondents choose the same response for each question, particularly on scalar questions, as they get bored with the survey). 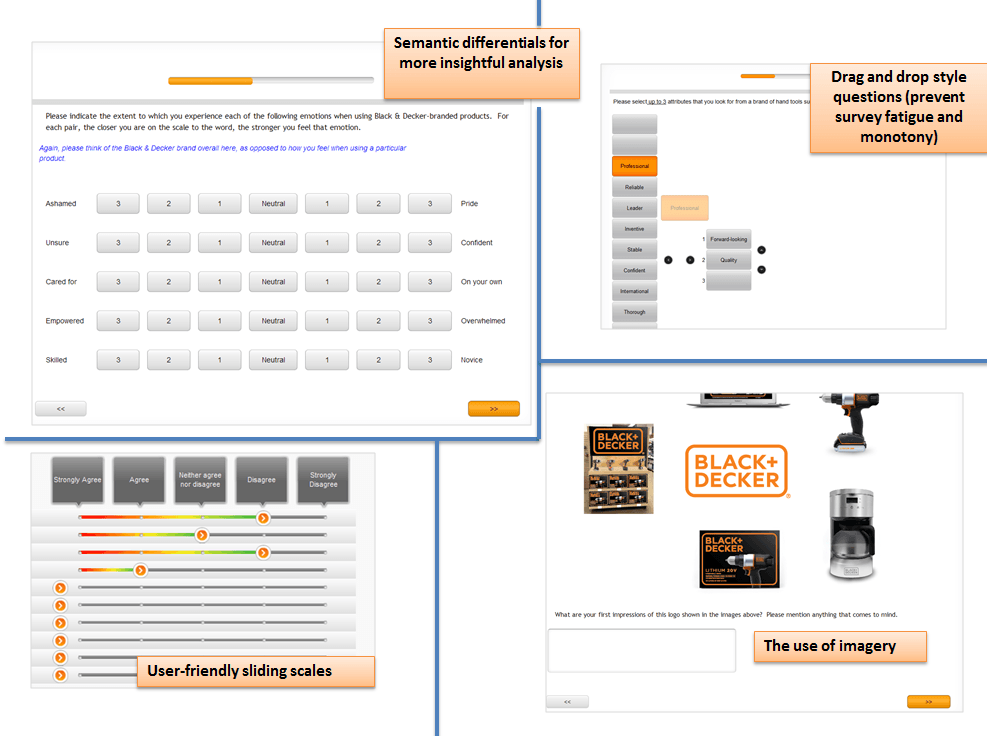 There can be no doubt that there is a role for gamification in business-to-business surveys. However, as with everything, they should be used in moderation. While some b2b respondents may love projective questions, others may feel that a survey is being trivialized if they are asked to personify a brand as a person, an animal or a car.

There is no reason why the survey shouldn’t be fun; after all, business is simply a game, albeit a serious one. That said, we don’t want people to happily click responses just to see how the survey will react. We want gamification to provide well considered answers.